Founded in 2015, the Rock River Players (RRP) launched with a mission to keep the lively arts alive in the West River Valley. Since the inaugural production of Our Town (August 2015) the ever-growing company has presented ten plays –including a musical; an evening of one-acts, another evening of suspense; several cabarets; training in lighting, producing/directing, and improvisation. It’s engaged in a storytelling project in assisted living homes; premiered several new works; entertained hundreds from our neck of the woods and well beyond; included actors ages 8 to 86; and attained non- profit status. And though it all, the RRP’s gratefully called the Williamsville Hall home.

At the time the pandemic hit last spring, RRP actor/director Bahman Mahdavi was in the midst of working with nearly two dozen performers to create a May (’20) production of Hecht and MacArthur’s The Front Page. Following would have been a summer production, a cabaret, and the next major production, Arthur Miller’s Death of a Salesman. But all that stalled and, while I fretted and bemoaned what to do to keep RRP alive, Bahman stepped up. With in-person performance not a viable option, he—with a background in film production– became excited by the idea of developing solo shows that could be safely filmed and made widely available through BCTV and online.  Teaming up with Hooker-Dunham Theatre’s Artistic Director, Jon Mack—of So. Newfane—the two forces honed a lineup of various episodes, each curated and produced by either Jon or Bahman. Each episode of SOLOs is a co-production of RRP and the Hooker-Dunham Theater, given the pooling of resources and sharing of expenses and tasks. And each episode is filmed on the H-D stage; videographer for the series is BCTV’s Austin Rice who’s an essential player in the SOLOs project. Kudos to Bahman and Jon for facing that reality and keeping theater alive for us, albeit virtually. They have created a model that can endure as long as it needs to–until the dark cloud lifts, until we can applaud theater together again live, en masse.”

Looking at the work produced thus far, Bahman reflects: “Seeing what individual performers have chosen to present and working with them and with Austin and Jon to make it happen has been a life-giving force in a dark time. It’s really been an honor and a pleasure.” Jon adds, “Even though the performances are by single individuals, the aim of SOLOs is to bring actors, directors, and writers together with their audience. The performing arts are all about the connection between artist and audience. The Hooker-Dunham is delighted to be hosting and co-producing an event which makes that connection while keeping safe. By collaborating with the Rock River Players, we’ve been forging ahead to create exciting work.”

Up next in SOLOs premiering March 19 on YouTube and BCTV is Episode 6: “Sense and Nonsense.” This episode takes aim at the destructive nonsense of gender-role stereotyping mixed with the whimsical nonsense of Lewis Carroll’s poems. And on April 9, “Originals,” a diverse collection of unique work.

SOLOs will carry on for the foreseeable future and then, when the time is ripe, we’ll get back to the Hall and to the agenda thrown into a pandemic hiatus. To get involved with the RRP—either in the taped series or, eventually, live, visit the RRP website, rockriverplayers.org or write verbatimvt@gmail.com. And to support the joint work of the Hooker-Dunham and the Rock River Players, you can make a tax-free contribution at https://www.rockriverplayers.org/donate/. And thank you for that! 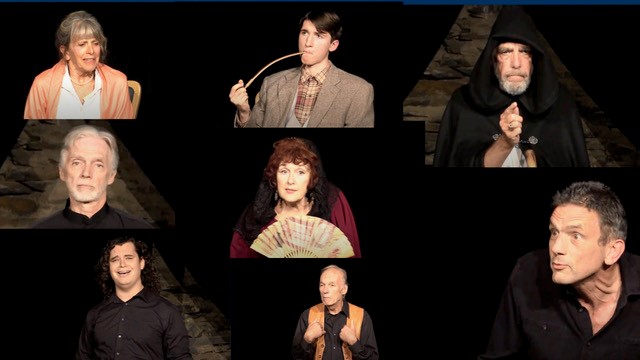 Links to all the Episodes in Solos