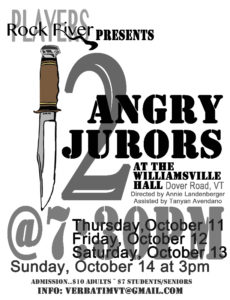 A riveting courtroom drama about a jury’s deliberation in a homicide trial, Twelve Angry Jurors was televised in 1954; soon adapted for the stage, it was then made into a highly-acclaimed film. Rose’s timeless piece has since evolved into myriad productions around the globe.

Twelve Angry Jurors — originally Men — depicts a jury forced to consider a homicide trial. At the beginning, they have a nearly unanimous decision of guilty, with a single dissenter of not-guilty who, throughout the play, sows a seed of reasonable doubt. Several jurors have different reasons for discriminating against the defendant: his race, his background and the troubled relationship between one juror and his own son. The RRP jury of eight women and four men– Bahman Mahdavi, John Moran, Dawn Slade, Susan O’Hara, Dody Riggs, Miles Keefe, Addie Mahdavi, Kayla Williams, Stewart McDermet, Rose Watson, Johanna Gardner, Rebecca Musgrove– finds itself in intense, heated and passionate debates until the denouement. Bill Lincoln rounds out the cast; Annie Landenberger directs; Tanyan Avendano assists.

Cast member Dody Riggs says, “Twelve Angry Men is one of my all-time favorite movies—great acting and a powerful message. It has been a tremendous challenge and an eye-opening experience to tackle this play that bears such relevance today.” Fellow juror Stewart McDermet adds, “Having men and women, all different personalities, compelled to decide a complex issue—the fate of a fellow human–is powerfully appropriate at this time in the world. People of the play are moved to realize truth beyond their personal biases—beyond “alternative facts”– and to open themselves to other possibilities.”

Tickets will be available at the door; to reserve in advance and for more information write: verbatimvt@gmail.com.