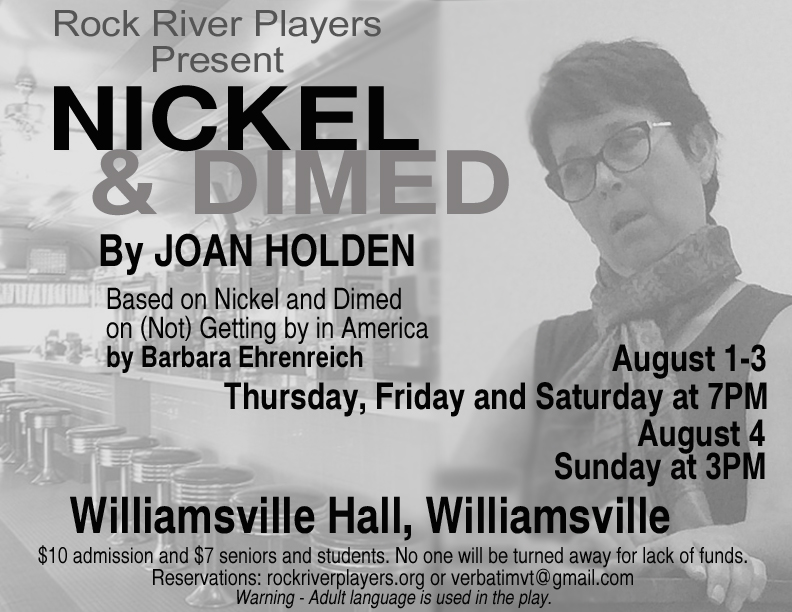 Ehrenreich’s memoir chronicles her journey across America as she tries to live on minimum wage. In the script version the audience feels for the author, played by Vicky Santiesteban, as she weaves in and out of the lives of her co-workers who labor to fulfill job commitments while struggling to balance life challenges at poverty wages: Gail (Dawn Slade) the waitress, and others at Kenny’s Diner, dealing with pressures both on and off the job; Carlie (Cherie Moran), an Economy Inn housekeeper trying to find employment in keeping with her declining health; Holly(Sherry Brown), in charge of the Magic Maids house cleaning crew whose craving for advancement is threatened by medical problems; Patti (Sue Kelly), the nursing home cook who escapes into fantasy; and Melissa(Sherry Brown), the Mall-Mart associate who finds in religion the beginnings of self-assertion.

As director John Moran reminds us; “Economic justice demands fair pay and medical care for the people who provide our service economy.” From an experienced perspective, he adds: “Since the government has failed, we hope this play will give the community incentive to demand action.”

“Can an fifty-five year old, upper middle class author survive in a low wage economy?” asks Moran. “Come and find out. This 2001 book is an eye-opener, still so relevant today.”

Rock River Players, a 501c3 non-profit theatre collaborative, grows on the inspiration and initiative of those who wish to see the lively arts thrive in the West River Valley.For more information contact verbatimvt@gmail.com